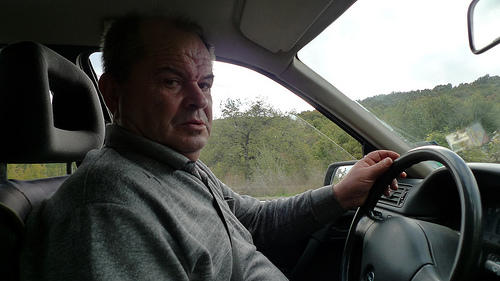 We’re on the way towards Turkey and we’re communicating using
German. Amanda sits next to our driver, an older Bulgarian man with car problems.
– “Gross problem mit das Auto!”
– “Turkey, geld!” He’s somehow going to Turkey in order to get money to fix his car.
Or what is he telling us?

Our dicta phone is coming handy. When we can’t communicate properly, we usually try to learn bits of the language of the country we’re traveling in.

He’s playing Turkish music to us. I reckon I would get the same show from the local immigrants of my home country if I’d just asked them. Why didn’t I?

– “Scheisse!” He doesn’t like what he hears.
Constantly switching tapes, cursing in German.

The landscape is fantastic; It’s open, wide, hilly. Sunny. Looks like a scene from “Gladiator”.

The bass is scrambling more than his motor.
Broken speakers.

Our driver look a bit like a mix of Danny De Vito and Jack Nicholson. Catsy eyes and eye-brows with a kind smile and dark colors. Pattern baldness. Compressed space between eyes and mouth.

– “Karta! Karta?” He is asking us for The Map.
We don’t have one.
– “Wir haben nichts einen Karta”
– “Wass?! India! No karta?!”
We’re hitchhiking to India and we don’t have a map.
Haven’t really thought about it before.
Never felt the need for one.

We’re driving on a really lousy road.
He tells us that this is the road where his “Auto” broke down.
– “Hier, das Auto, electroniks, kaputt!”

I can smell newly put asphalt and cigarette smoke. He is constantly smoking.
Gangsta rap on the radio. Probably produced by the stoned guys that ran the hostel (also serving as a hiphop studio) where we slept the other night. It was a nice place but poorly managed.

Now we’re starting to understand each other.
– “Vize Auto, my friend, autobahn london – iraq.” He’s saying that his friend (who is going to fix his car) is waiting for him in Vize, and that he’s gonna let us off at the motor way that connects Great Britain to Iraq.

We’re entering Asia now.
Before this trip, I’ve never thought much about roads. 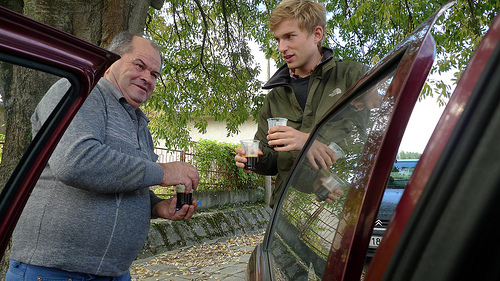 – “Eh.. trinken sie Kaffe?”
He’s inviting us for coffee.
Amanda is stuck in the door with her seatbelt.
– “Yes. Coffee. Teşekkür ederim.”

We're hitchhiking from Poland to India. On our way we get to meet a lot of beautiful and positive drivers...