Three police men, one promised mayor and a bunch of random men hanging around the public square, all watching the computer screen in confusion, while me and Amanda are trying our best to make them understand one concept: PARTICIPATION!

It’s been easy to arrange the Chicken Dance so far. Easy in the sense that people have been in contact with flash mobs, and art performances before. YouTube has been great at spreading these, but until last week, YouTube was banned in Turkey.
Perhaps that’s why the concept isn’t as well spread here?

I summarized the story (keep on reading) and will now fold it out for you: Last week we tried to arrange the Chicken Dance in Bergama. As you probably can guess, we failed pretty hard.
But not without a fight!

We had gotten a note written in Turkish that told the story and our mission. Now, more confident than ever we handed it over to the men that spent their days in the public square. They looked at it, perplexed and snatched the note from each other. Some of them talked to us, and then after a short while one man claimed that it was in fact illegal to arrange the dance in the public square. 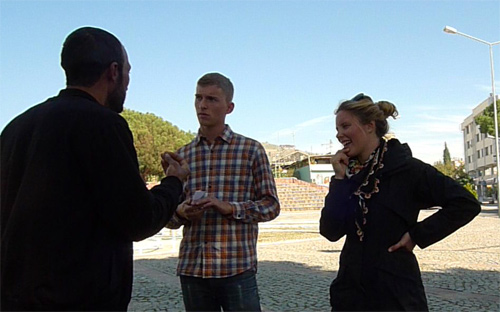 – “Problem with Police, girls and boys dancing together, here!”
– “Oh, really? Why is that?”
He didn’t answer “why”. The whole group kind of shrunk as we questioned the idea, the law and his words. We crossed some kind of line here.

– “Where can we find the police station, so that we can ask them for permission?”
He pointed at a building that was very close to the square.

With another man accompanying us, we walked over to the police station. Meanwhile the man (who spoke German) said things like:
– “Das ist sehr gut! Bürgermeister ruft das Volk, alle zusammen und jeder wird dann tanzen!” Meaning that the mayor probably would summon the town for this dance. Our hope was higher than ever!

At the police station we were sent between 4 different inspectors and then after 45 minutes we had our official permission and one inspector that tried his best to help us arrange the Chicken Dance. He tried convincing his co-workers, people on the streets and the men in the square. There was a limitation to this though: He would not dance with us himself.

No one else would either. They started talking about getting a local musician that could play for us (we insisted that we’d just sing instead) and then we showed them the video. On our computer.

– “This is in Brasov, Romania. And Bratislava, Slovakia. Varna, Bulgaristan. Stockholm, Sweden. Visby, Gotland. Warsaw, Poland. And now… Bergama – with you, in Turkey! Come on now, dance with us!”

And then. They all just turned away… and slowly… walked away from us… as if… they didn’t see us anymore.

We see four possible solutions to this:

We’ll let you know how it goes.
Do you have any suggestions or feedback on the Chicken Dance?
Write a comment and tell us! 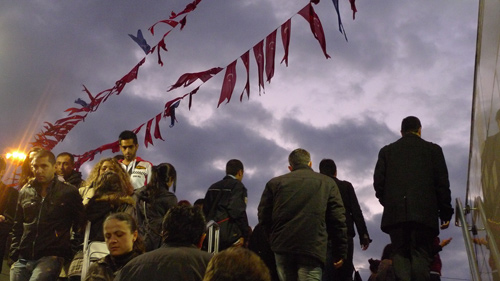 You wake us up and we greet you, Istanbul.
Your massive population keeps you bathing in glorious activity,
hopes and dreams.
Never before have we seen anything like you.
Never before did we believe that we would.
You shattered our reality, and for that, we salute you.
Sherefe!

We’ve been on the road for a month now.

Here is this months (September/October 2010) statistics:

We believe in full transparency, so you can expect to see a summary like this every month.

We can’t say anything else than that it’s been a huge success so far!
Many people have emailed us just to say that they feel very inspired, and that’s why were doing this.
We’re extremely passionate about this project.

This blog is not fully reader-supported yet (financially), but that’s what we’re working towards.
We believe that this project will be able to support itself in a few months.
Help us get there by donating today!

Thank you for reading, supporting and participating in our adventure.
Your engagement means a lot to us.
Love,
Robin and Amanda.

Two weeks before we left Sweden we started a pledge (heavily inspired by Kickstarter) to try out if we could get help to buy a new and better camera. This is the result!

All together, that is €705.
We promised that we would return the money in case we didn’t get at least €1500. All the sponsors have insisted that we are welcome to keep the money anyway. Thanks a lot! The money will go to a dictaphone and a new computer (we’ve confirmed that it’s OK with all the sponsors). This will enable us to work more effective, resulting in more high quality material for you to enjoy.

Thoughts about the pledge
The pledge system was meant as a trial to see if we could get support from our readers in order to produce material of a higher quality. Since everything we produce goes back into the public domain (more or less) it would be great if people who enjoy it would pitch in, and help fund it directly.

We consider it a success, and we’re now able to buy some new gear that we are in need of. Maybe we would have been even more successful if we would have marketed the pledge system more actively, but we didn’t.
We feel that the result is amazing and we are very grateful for your support.
Thank you again!

The first postcard was posted from 120 meters under the surface in the Wieliczka Salt Mine to a kind person who pledged €35 :) .

What did you feel and think about this experiment?
All feedback is very important to us!

It will still be possible to sponsor us, with a similar system.
We’ll evaluate and post it when it’s finished! 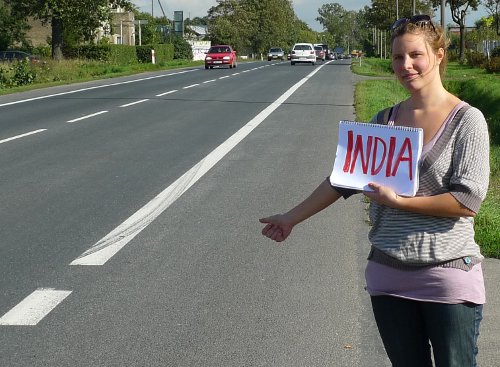 How do you host people in a nice way?

Well, Jarema Bedzel in Slupsk has all the answers!
Our first CouchSurfing experience in Poland turned out to be a great one. We got picked up by our host in the center of Slupsk, after an interesting first day of hitchhiking. He brought us to a local pub where pirozhki and Polish beer with raspberry juice was served. Later on that night, we had ice-cream, cappuccino and a great night’s sleep at Jarema’s and his girlfriend Kate’s place.
Thanks a lot friends!

Both the second and the third night, we ended up camping behind petrol stations, in Glogowo and Bydgoszcz. You probably know where that is, right? 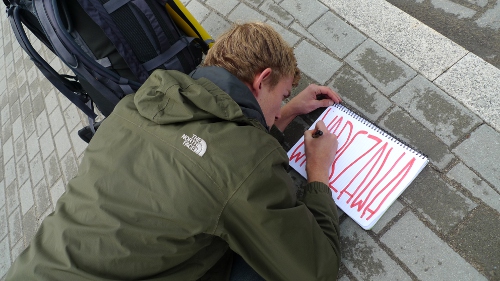 Today we are lucky to tell you that we’ve reached Warsaw after amazing meetings with the people who’ve driven us!
At the moment, we’re camping a few kilometers outside the city center.