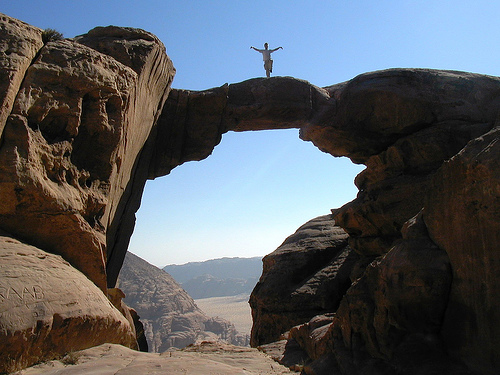 We are happy to present to you a guest post by Alastair Humphreys!
Alastair is a British traveler and blogger who’s been cycling around the world for over 4 years. More than 46000 miles, that is. Very impressive! Check out his blog and read about his great adventures! He is a superb source of inspiration. But first, here is Alastair’s stories from Jordan:

I have happy memories of Jordan, my favourite Middle Eastern country.
I remember sitting on a low stool in a cafe in Amman, smoking a
fragrant waterpipe and playing backgammon with a wise old man.
His parents had given up their traditional nomadic desert life to come and live in the city when he was a boy.
He bought me glasses of tea. In return he had the pleasure of winning several games of backgammon.

Ahmed threw the dice, one red, one green, onto the board of black wood and pale mother of pearl (“All the four colours of our flag,” he
observed, exhaling a sweet plume of apple smoke above my head).
He spoke of backgammon as being a philosophy for life: it is black and
white and you have no choice over what is dealt for you, or over what
other people do to you. But the choice that you do have is how to best
play your own pieces in order to make all you possibly can of what you
have been dealt.

With his wisdom ringing in my ears I continued down the rolling King’s
Highway to the staggeringly lovely gorge of Wadi Dana that drops a
vertical mile down towards the Dead Sea. Except for a few olive groves
the land was virtually barren. Shepherd boys sat squinting as their
goats foraged the flinty slopes. Outcrops of rocks, jebels, were red
and rough and in the distance smoky blue mountains faded smoothly into the desert floor. The mountain tops were clear against the sky but
their bases merged together into one endless string of peaks, seeming
to run across all Arabia. What an ageless, beautiful country Jordan
is.

Petra was every bit as beautiful as I had hoped since first watching
Indiana Jones’ Last Crusade. It is a place that provokes ambition and
far-sightedness. Projects that had taken several lifetimes to complete
mocked the triviality of our modern lifestyles that demand instant
gratification. It will encourage you guys that you can Chicken Dance
all the way to Inida.

I was reading TE Lawrence’s Seven Pillars of Wisdom. So I was
desperate to spend a few days in the vast natural amphitheatre of Wadi Rum, a magnificent swathe of blushing desert hemmed in by towering ramparts of rock. I imagined Lawrence and bands of vengeful Arabs, mounted on camels and armed to the teeth, riding silently up that valley, a “processional way greater than imagination”, where I now
sat. I brewed tea on my camping stove read Lawrence describe how “our little caravan grew self-conscious, and fell dead quiet, afraid and
ashamed to flaunt its smallness in the presence of the stupendous
hills.”

The silent timelessness of Wadi Rum reminded me of my own minute
insignificance. Lying on the valley floor the black stillness was so
absolute that I could literally hear myself blink. Rush hour felt a
long way away and risibly irrelevant. These are the moments when I
feel really thankful to have been able to take long journeys. Magic
moments. And Jordan had more of them than most countries I have been to.

We spent 8 hours on the border from Turkey, and therefore had lots of time to look forward to the...